Skip to content
HomePosts tagged 'supporting your point of view'

They say that nothing is free and in America that is certainly true as regards freedom of religious beliefs.

If you are a Christian, that is.

If you are a Muslim, or a Hindu, or a Sikh, or a Buddhist, or even an atheist, the constitutional protections of your civil rights will be upheld and fought for by all and sundry. Silly looking people will hold up even sillier looking signs supporting your point of view.

If you are a Christian, however, you will find you only have the freedom to do what minority groups dictate, not what conforms to your religious beliefs.

Aaron and Melissa Klein, the owners of a mom and pop bakery they call ‘Sweet Cakes By Melissa’, found that out a while ago when they refused to bake a wedding cake for a lesbian couple in 2013. They have been ordered by the Oregon Bureau of Labor and Industry (BOLI-cks for short) to pay $135,000 in damages to the two lesbians for “emotional suffering.”

Apparently in Oregon, and probably in other states, it is now illegal for a business to refuse to serve someone because of their sexual orientation. Most probably the same applies if you are of a particular race, color, or religion. However, there is no equivalent law to protect the religious beliefs of business owners. 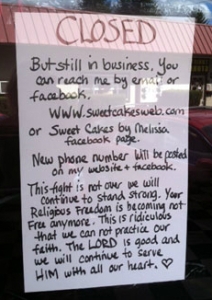 Now I could care less whether you are a lesbian or a Presbyterian, that’s not the issue here. The issue is that you can’t have a law that protects one sector of the community at the expense of another. More to the point you can’t have a ridiculous legal system that is both unfair and illogical.

And it’s getting worse.

Just as the Freedom Act took away more freedoms than it gave, the government is stealthily and overtly eroding the individual citizen’s right to live their lives as they want to and as their beliefs dictate.

Sure you have to have rules, like don’t murder people, drive on the correct side of the road, and that kind of thing otherwise there would be chaos. But trying to control and micro-manage every thought and action of the people, which is what the government is now about, is both unnecessary and unwanted.

I’m now wondering what happens if you come into my gun shop and I don’t like the look of you and refuse to sell you a gun or other weapon. Am I within my rights? Or can you sue me for the “emotional suffering” of not being able to kill your family or hold up a bank?

Or can I sue you if you own the gayest cake shop in America but refuse to serve me because I am a Christian? That would be an interesting one in the light of the Oregon decision.

What happens if you are a Christian lesbian? What sort of “emotional suffering” does that cause? And can you sue yourself for damages? I’m sure there’s a judge somewhere stupid enough to grant you a big payout, but of course you would have to pay it to yourself, unless the state would step in because of your sexual orientation and cough up the cash for you.

You see where this is going?

Just as they wrecked the education system in many western countries by teaching the brightest people in the school at the same pace as the dumbest, thereby lowering the level of education of everyone and churning out a multitude of idiots who can barely read, or write, or count, now we have to pander to every minority no matter how few people they represent and no matter how much their minority beliefs offend our own.

Minority rights don’t really matter to the government because they don’t make up enough of the population. If and when the need arises minorities can be brought to heel. The majority is a different matter though and what has been discussed in this blog post is all part of the dumbing down of society and instilling fear in anyone from the majority community who dares to stand up and challenge authority. The threat of a  six figure fine, or worse, ensures compliance in most people.

My old late lamented friend George Carlin summed it up so well when he said, “Governments don’t want well informed, well educated people capable of critical thinking. That is against their interests. They want obedient workers, people who are just smart enough to run the machines and do the paperwork. And just dumb enough to passively accept it.”

Otherwise you might as well throw out the “all men are created equal” bit of the constitution and just let the tail continue to wag the dog.