Anyone who has traveled by air anywhere in the world since the 9/11 attacks has been the victim of the idiotic security measures at airports.

Belts off, shoes off, laptops out, body scan or grope – you know the drill. All useless and ineffective and there, like a lot of other stuff, to give the impression that the government is doing something when in reality it is doing nothing.

And as always the stupid rules are enforced by even stupider people.

So, who is poor Oliver Buckworth?

He’s a 28-year-old Melbourne-based interior designer, a threat to no one, and a victim of the security morons that infest air travel these days.

You see Oliver was on a flight in Australia, on a carrier called Tiger Airways. To pass the time he started doodling in a note pad he had with him.

The doodle said “In a land of melting ice-cream, sandy feet and fluffy bears, how could anybody be fearful of terrorism?” and along with it was a visual pun with the word “terrorismadeup” picked out in different colors to suggest that “terror is made up”. Being an interior designer he also drew a chandelier on the same page.

Now you are probably asking, what exactly was his crime?

Doodling with intent to do what?

Having a sense of humor?

Or just getting bored and passing the time with his note pad and pen?

Apparently Tiger Airways have a “zero tolerance” policy “towards inappropriate and antisocial behavior” which seemed to include Oliver’s doodle. He said he was writing a sentence about the absurdity of recent fear-mongering statements about the threat of possible terrorist attacks, but it was enough to have him thrown off the plane and handed over to the Australian Federal Police.

To be fair to the police, after doing a background check on Oliver they realized that the airline idiots hadn’t uncovered the next Osama Bin Laden and they didn’t take any further action.

But, choosing not to involve themselves with common sense, Tiger Airways banned him from using the airline again, not that he’d probably want to now anyway.

Here’s Oliver’s doodle, make up your own mind. 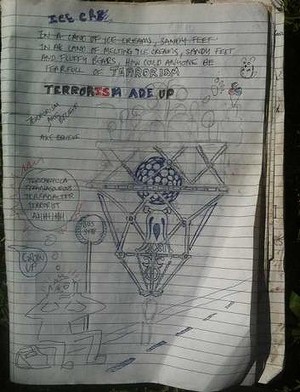