Some blogs meander along trying to be very politically correct. But not here at fasab. Controversial or not, the philosophy here is to tell it as it is.

So to repeat the question in the title….

Should we get rid of homos?

Of course, I’m talking about homographs and homophones – I don’t know what YOU were thinking of?

If you are a regular visitor to this blog you will know that quite often we have a look at amusing misprints or mistakes on signs, classified ads, newspaper headlines, or wherever else they can be found.

Nearly always the problem is peoples’ failure to grasp the intricacies of the English language.

If you are born and bred in an English speaking country then it is relatively easy to grasp the basics of the language, although there is a steady deterioration in some of these, like speleling for example. (That was a deliberate mistake for comic affect by the way.)

So what about the homos then?

For those who haven’t made up their mind yet, a homograph – (also known as a heteronym, but where would have been the fun in that title?) – is a word of the same written form as another but of different meaning and usually different origin.

Sometimes it is pronounced the same as the other word, in which case it is known as a homograph.

Sometimes they are pronounced differently, in which case they are called homophones. 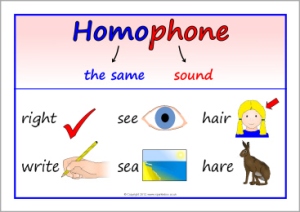 An example of the former is the word “letter” which is pronounced the same whether the meaning is a message written to someone, or to describe a particular member of the alphabet such as ‘A’, ‘B’, ‘C’, etc.

An example of the latter could be the word “lead” which is pronounced differently if it means a metal (“the lead was very heavy”), or to be the front runner of a group of people (“he was in the lead”).

There are a lot more homos around than you might at first think. Here are just a few examples I saw recently. I hope you find them interesting and maybe even begin to realize what a nightmare learning the English language must be for those not immersed in it from a very young age.

11) The insurance was “invalid” for the “invalid”.

14) The buck “does” funny things when the “does” are present.

Let’s face it – English is a crazy language.

There is neither “pine” nor “apple” in “pineapple”.

“Sweetmeats” are “sweet” but are candies and not “meats”, whereas “sweetbreads” are neither “sweet” nor “bread”, but in fact meat.

Boxing “rings” are “square” and a “guinea pig” is neither from “Guinea” nor is it a “pig”.

You can make “amends” but what do you do if you have just one thing to amend? Or if you have a bunch of “odds and ends” and get rid of all but one of them, what do you call what’s left?

And if a “vegetarian” eats vegetables, what does a “humanitarian” eat?

How can a “slim chance” and a “fat chance” be the same, while a “wise man” and a “wise guy” are opposites?

Or why can people like the Amish “raise” a barn, meaning to “erect” a building, whereas everywhere else when we “raise” a building to the ground we mean we “demolish” it?

You have to marvel at the unique lunacy of a language in which your house can burn “up” as it burns “down”; in which you “fill in” a form by “filling it out”; and in which an alarm goes “off” by going “on”.

Even when you are standing still you can be part of the human “race” and you can look at the stars which are visible when they are “out”, unlike a light which is invisible when it is “out”.

It’s easy to understand “UP”, meaning toward the sky or at the top of the list, but when we awaken in the morning, why do we “wake UP”? At a meeting, why does a topic “come UP”? Why do we “speak UP”?