It was either a title with a pun in it or just call today’s post “The Sunday Sermon”, but as you can see the pun got the better of me as usual.

If you hadn’t guessed, this one is my take on the goings on in North Korea.

Before the sermon starts I should preface it by saying we are in the current mess because politicians faffed about instead of stopping the proliferation of nuclear weapons when they had the opportunity. It’s their mess, but unfortunately we are all in it with them.

JFK had Cuba and now BHO has North Korea, both countries run by dictators and both in their time posing a nuclear threat.

Why do the Democrats always get the best crises? Poor old Dubya and his greedy and power hungry ally in Britain, Tony Blair (often deliberately spelled Bliar for good reason), had to make up an excuse to start a war with Saddam Hussein. Remember the Weapons Of Mass Destruction that never actually existed?

Of course, when JFK was doing his statesman like thing, during his brief breaks between his girlfriends, I was far too young to know or care about nuclear threats or more world wars. I had other more important things to be getting on with like battling invaders from Mars or trying to pluck up the courage to explore that eerie wood just a short distance from the bottom of our garden.

So what I know about the Cuban crisis of the early 1960s is all gleaned from books and reports from that period which are now a matter of history. (We’ll leave the debate about just how accurate and reliable that is for another time.)

The truth seems to be that the Cuban nuclear crisis had very little to do with Cuba or Castro. It was a posturing competition between the United States of America and the Soviet Union, and to a lesser degree a pissing contest between Kennedy and Khrushchev.

In both Washington and the Kremlin, although there were the warmongers, there were more people who were sensible enough to realize that devastating each other’s countries would leave them both weaker and achieve very little. They were able to reach that conclusion simply because they were people who were not completely insane or delusional.

It probably seemed difficult at the time, but for JFK it was a relatively easy crisis to manage.

The ‘nuclear crisis’ facing Obama, if indeed it is that, is a different kettle of fish because Kim Jong-un shows all the signs of being both delusional and ever so slightly insane.

He can’t be held entirely to blame for this. He is the son of a long time dictator, who himself suffered from multiple delusions. And he was brought up in a militaristic and jingoistic regime, which is what dictators like to create for themselves simply because it makes their own people easier to control. North Korean propaganda has taught the public that military goals and economic goals are intertwined and therefore that Kim Jong-un’s actions are for the good of his people.

In the latest moves to up the ante, the North Koreans have told Britain and Russia that they should consider the evacuation of their embassies in Pyongyang. They have also moved another missile to their east coast as a further threat to US Pacific bases.

This in itself is just the latest response to UN sanctions and South Korea-US military drills, both of which have done nothing to ease tensions and in fact have annoyed the North Koreans immensely.

Now the North Korean army is saying that it has received final approval for military action, possibly involving nuclear weapons, against the threat posed by US B-52 and B-2 stealth bombers taking part in the joint drills. And all this has been accompanied by a series of apocalyptic threats of nuclear war in recent weeks.

The trouble with all this posturing is that Washington, which always gets a ‘F’ for ‘FAIL’ in Foreign Policy, very seldom, if ever, gets it right at the right time.

Washington doesn’t seem to understand that the macho culture in many other countries makes it extremely difficult for them to be seen by their own people as the one who blinked first. Losing face has a terrible stigma for them.

Further military ‘exercises’ and posturing will probably have the result of leaving the Jong-un regime with little alternative (in their eyes) but to act aggressively.

How that aggression will manifest itself is anybody’s guess. Least likely would be an attack on America – it’s too far away for the type of missiles North Korea currently has.

An attack of some kind on the US base at Guam is possible, as is an attack on neighboring South Korea. The latter, depending on the scale and the number of casualties, could spark of retaliatory strikes by the US-backed South Koreans and from there it is a short step into a conventional and probably very bloody war.

And we should remember that the Korean war during the 1950s was a spectacular waste of human lives. Generals sacrificed their men for years and ended back at the 38th parallel, more or less the same place they started.

Admittedly things might be a lot different this time if China decides that the North Korean regime is too out of control to support militarily. I doubt very much if it is in China’s long term interest to have a whacky dictatorship armed with nuclear weapons on their doorstep. After all it’s only 1,000Km to Beijing and more than 5,000Km to Hawaii, the closest state of the US to North Korea. At the same time would China want an economically united and strong US dominated state on its borders?

The jury is still out on that one.

Another thing that Washington gets badly wrong is that it thinks that because it is the most powerful military nation on earth – and it is by a long way – that therefore other countries will be afraid to take it on.

Rather than a comparison with the Cuban Crisis that everyone is concentrating on, I see parallels between North Korea today and Imperial Japan in the 1930s. Both are/were jingoistic regimes with an ’emperor’ having complete control, and both created a military style regime more as a way to suppress and control their own people, and therefore to cling to power, than to attack another nation.

But things being what they are, and people being so bloody stupid it’s unbelievable at times, there comes a time when those in power in such regimes lose their sense of reality and get carried away believing their own propaganda.

Hence Pearl Harbor when Imperial Japan forgot that when something big and powerful is asleep you should never poke it with a sharp stick, coz when it wakens up it will kick the crap right out of you! 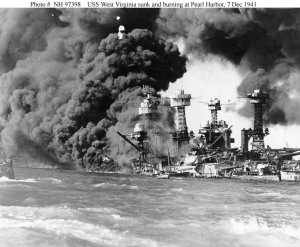 And hence, the North Koreans are not afraid of taking on America. They should be, but they aren’t, which again makes some kind of attack more possible the more they are backed into a corner.

Thankfully there are some signs that Washington might be getting the message and preparing to step back from the rapidly approaching brink. American officials have reportedly decided to “pause” the recent show of US force in Korea because

they are surprised at the intensity of the North’s response.

I mean who could have seen that coming? Well the answer is just about everyone except for the cretins in Washington!

What is surprising, however, is that the most sense talked about the whole affair recently has been from the world’s number one cigar salesman, Fidel Castro. In fact, make that doubly surprising, in that he has said some things that I am in agreement with and that he is still around to say it!

He said “If a war breaks out there, there would be a terrible slaughter of people” in both North and South Korea “with no benefit for either of them.” And also that the “duty” to avoid the conflict is in the hands of Washington “and of the people of the United States.”

Castro hasn’t quite figured out that once elected US Presidents do whatever THEY want, not whatever the PEOPLE want.

But what he must have figured out is that politicians like to be liked because he also warns President Obama that his second term, “would be buried in a deluge of images that would portray him as the most sinister personality in the history of the United States.”

Equally, he cautions the North Koreans that now they have, demonstrated their “technical and scientific advances, we remind them of their duties with those countries that have been their great friends.” And he urged them to remember that “such a war would affect … more than 70 per cent of the planet’s population,” and decried “the gravity of such an incredible and absurd event” in such a densely populated region.

Do you think he is hankering after one of those Nobel Peace Prizes, like the one Obama got for not being George W Bush?

And who knows what is going to happen in the Koreas?

Certainly not the mob in Washington I think!