They’ve been ‘beautiful’,  they’ve been ‘big’  and they’ve been ‘unusual’.  Today we have another ‘significant’ number, fifty-two, so-called because of its use and the beliefs surrounding it. 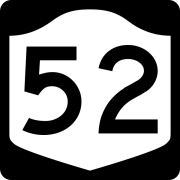 Fifty-two first came to mind because it is the number of weeks in a year. Simple enough. But, as usual, with these significant numbers there is more to fifty-two than you might at first imagine.