Last year the ‘new thing’ that all the techies were talking about was the ‘Internet of Things’.

For those who are not up to speed on this ‘new thing’, the ‘Internet of Things’ is about getting all of our household devices connected online.

Already there are about 10 billion net-connected devices and predictions are that by 2020, just five years from now, the number will have grown to 50 billion devices.

More importantly, for the businesses involved in this industry, and for investors, the ‘Internet of Things’ market will be worth at least three-quarters of a trillion dollars – that’s an ‘illion’ with a ‘tr’ in front of it!

As you would expect, the big technology players aren’t wasting any time getting involved. 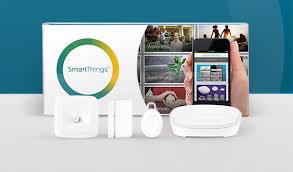 Samsung has developed what it calls a ‘SmartThings Hub’ which will organize all of the connected devices in your home regardless of what platform they run on. The company’s CEO has promised that by 2017, 90% of its products would be connected to the Web.

The Samsung ‘SmartThings Hub’ is compatible with the Apple ‘HomeKit’ for iOS8, which was introduced last summer.

A lot of the ‘IoT’ devices are aimed at the home security market. Many of these are already available, but with the development of the ‘IoT’ they will become much more sophisticated, have additional features, such as cameras with facial recognition capabilities, and be more affordable for the average consumer. At the moment most of the better systems carry a hefty price tag and are aimed at the high-end market.

Another big market is babies, with a number of devices coming to the market that monitor almost everything about your baby and send that information to you wherever you are via a mobile device.

Other ‘IoT’ devices for the home include smart light bulbs, Bluetooth speakers, WiFi repeaters and lots of other home entertainment applications.

You will even be able to control your coffee maker or tea kettle via wifi.

And your pets have not been forgotten either. If you just can’t bear to be unconnected to your dog, for example, you can get a smart collar like the ‘Fitbark’ or ‘Motorola Scout 5000’. If this was pun day I’d tell you it came with a paws control.

It all sounds great, for those who like that kind of thing. And indeed some of the devices will be useful and hopefully cost effective and energy saving for the home. I don’t think you’re going to have any choice because new devices for the home will come with all this new technology built in.

The big problem will be sophisticated burglars and malicious tech savvy people, who will no doubt figure out ways of hacking your system and possibly gaining control of the whole set up.