It’s time for a Sunday Sermon!

Whether we realize it or like it, the advent of the internet has changed all our lives. From power users like myself to just casual users, things are a lot different from how they used to be.

There are, of course, negatives like the increase of spam, fraud, pornography and so forth, but by and large the impact of the internet has been a positive one.

It has made finding information much quicker and easier.

It has given us better and cheaper communication possibilities such as Skype.

It has revolutionized shopping for millions of people.

And it has spawned new social interaction platforms such as Facebook, Twitter, Pinterest, Tumblr, and not forgetting blogging sites such as WordPress, allowing people to find groups and individuals all over the world with similar interests to their own.

But perhaps the greatest thing that the internet has achieved is to give freedom for ordinary people to say what they want to say and have that reach a much bigger audience than would have hitherto been possible without having to spend vast sums of money trying to do it.

Unfortunately, however, that freedom is the one thing that governments cannot tolerate. Hell bent on control, they see the freedom that the internet provides as a threat to their power. And slowly but relentlessly they are chipping away at that freedom.

In China there is no pretense or deceit. The government there controls the internet and that’s just how it is.

However in the West, as they always do, governments create smokescreens to hide their real objectives. They read our private emails and listen to our private phone calls in secret, only reluctantly admitting to it when they are exposed by a whistleblower such as Edward Snowden, last seen leaving Hong Kong and heading for Moscow. 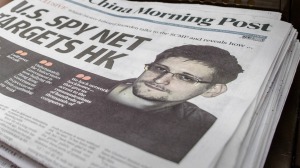 And even when they are exposed they can’t tell the truth about what they are doing and why they are doing it. Invariably the excuse trotted out is “security issues”, in other words, they are doing what we don’t want them to do and invading our privacy, for our own good!

If governments expect the people to have confidence in them, then they in turn should show confidence in the people. That means doing their job properly and targeting people and groups that are a possible threat without treating everyone as a potential terrorist.

And it means being honest with their people.

As I said earlier the game isn’t about what is good for the people, the game is about control of the people. And a big part of that control is ensuring that the herd shall not be heard – if they have anything important to say that the government doesn’t want us to know!