You know, sometimes you just have to laugh at the stupidity and short-sightedness of politicians.

The latest idiot to hit the headlines is US House Representative Jim Sensenbrenner. You might remember him, he was the one who wrote the supposed anti-terror law now known as the Patriot Act.

Now he has asked the European Parliament for help in controlling the obviously completely out of control NSA who have decided this piece of ill thought out legislation gives them carte blanch permission to snoop into everybody’s business, friend and foe.

Apparently Congressman Sensenbrenner has belatedly seen the error of his ways and wants Europe to put pressure on the US to change its legislation to stop the spy agency’s mass communications data collecting activities.

Today Sensenbrenner says that the NSA has abused the trust placed in it by the American people. Powers that were designed to protect them, but powers that have been used to spy on them instead. And the Brits are at it too!

Then there is the damage they have done to America’s standing throughout the world. The Merklegate scandal, where the German Chancellor’s cell phone was found to be bugged, is just one of many instances where America has treated its allies like enemies, creating suspicion and distrust where there used to be friendship and cooperation. 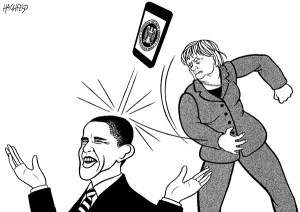 And the poor judgment continues, because Sensenbrenner’s solution to the problem he helped to create is not to get rid of this bad legislation, but instead to create even more bad legislation that purports to curtail the excesses of the former.

No point fitting a new lock on the stable door after the horse is already out and galloping roughshod over the privacy of the American people and their friends. 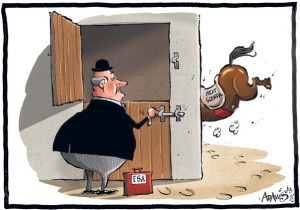 All very well for Jim Sensenbrenner to say sorry now, but wasn’t it inevitable that the massive ill thought out powers handed to the spooks after 9-11 would be abused?

Absolute power does corrupt – always! That is why checks and balances are necessary, only they need to be put in place in time.