Skip to content
HomePosts tagged 'poking it with a stick'

I know the summer is coming to a close, but the chill I’m talking about in this post is the one coming from the Cold War.

The thing that we though we had got rid of in 1992 when Daddy Bush said, “A world once divided into two armed camps now recognizes one, sole and pre-eminent power, the United States of America.”

That ended the Cold War and everyone was happy. America had won.

So why did it start again? And why did our politicians not have the gumption to avoid it?

I suppose the answer is that it all started again because America desperately needs a bogey man – a global one, not some terrorist organization like Al Qaeda or ISIS.

It gives them a reason to keep the war machine going which is good for the economy.

It gives them the chance to tell the world that the choice they have to make is between America and Russia (in other words, between ‘good’ and ‘bad’).

And indeed it used to be that way, when the Russian regime was hell bent on imposing their failed communist philosophy on the free world.

The problem is that America wasn’t content with winning. For some reason it felt it needed to win again.

This time it is trying to do so by bribing and coercing former Soviet satellite states into joining an economic and military (EU/NATO) alliance against Russia.

That has, understandably and predictably, provoked the Russians into once again flexing their muscles, the result of which we are starting to see in the Ukraine.

And so the Cold War begins again.

But it won’t be the same as the last one. Some things are very different.

And, thanks to the arrogance of organizations like the NSA, this time it is America, not Russia, who is perceived by the rest of the world as untrustworthy and untrusting of its allies. That’s quite the reversal of the old Cold War when it was the Russians who were notorious for listening in on conversations, bugging hotel rooms and the like.

In addition Russia is not currently bound to an outdated and failed communist dogma.

Despite all the bogus posturing of President Obama, who it seems can’t make up his mind to do anything, Russia will not allow NATO to set up shop in its backyard.

America has made a huge tactical mistake interfering so close to Russia. They are leaving Putin with little alternative but to do his own bit of posturing. The only difference is he means it.

When a bear is sleeping, poking it with a stick is never a wise move. Neither is trying to force it into a corner.

This time it may well bring consequences that none of us will like. 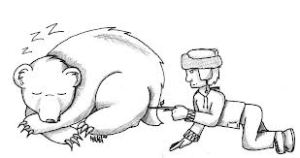