The London Olympic Games 2012 will finish later today. I’m interested to see what they have in store for the closing ceremony, bearing in mind that the opening ceremony was good in parts, but confusing in others.

As for the games themselves, after a shaky start I think you could say they were successful and very enjoyable for the public at large. I certainly enjoyed what I saw of them.

But what the whole show did illustrate very well was the sheer stupidity and incompetence of the politicians and the bureaucrats. They took a large, but relatively simple event, and made a laughing stock out of themselves.

Simply because the politicians and bureaucrats thought they could run everything better than people who know about staging events like these. They can’t! 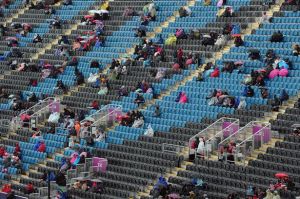 Right from the start the inefficiency was evident in the vast rows of empty seats at the various venues.

It got a little better as the Games went on, but a friend of mine who was there on Thursday evening told me that even for the much heralded Men’s 200 meters showdown featuring the extremely popular Jamaican runner Usain Bolt, there were at least 500 vacant seats in the stadium. 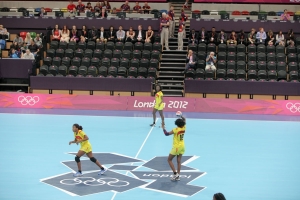 The problem was twofold.

First, a lot of tickets had been allocated to the corporate sector, far more than was necessary.

Second, for the rest of the people there was only one practical way to buy Olympic tickets, and that was through the ‘official’ government/bureaucrat controlled office.

These morons even tried to destroy normal commercial activity by making it a criminal offense for individuals to resell Olympic tickets.

But when you logged on to the government’s official website to try to buy tickets legally, bewildered visitors quickly found out that they had to jump through all sorts of ridiculous hoops to get them.

A bit like an airport arrivals lounge, UK residents were directed to follow one set of procedures; residents of the EU, but not of the UK, had another set of rules; and residents of other countries, yet another set.

Of course, you couldn’t just buy the tickets. First you had to set up an online profile, revealing all sorts of details about yourself that had not the slightest relevance to buying a ticket for the Games.

And when you’d finished all that you could print out your ticket, just like an electronic airline ticket or boarding pass.

Don’t be daft, of course you couldn’t. That would be far too efficient and sensible.

The bureaucrat way, despite the fact that they were directing everyone to use the online system, was to mail your tickets to you  –  hold on, let me repeat that  –  mail as in M-A-I-L, as in snail-mail NOT email – and they could only do that to the legal residency address you gave them in your profile.

Tough luck on “Johnny Foreigner” whose legal residency could have been on the other side of the world, in China, Australia, or New Zealand for example.

There was an alternative, if you could call it that. You could waste a few hours of your life going to one of the ticket offices, the locations of which the bureaucrats had ensured were in the most inconvenient places possible.

And when you eventually made it to the front of the queue you were confronted by a poorly trained and ever more poorly informed individual who had little idea what tickets were available at any given time.

The inefficiency of the availability of information was so staggering that an event that had been deemed ‘sold out’ at 10am, could turn out to have hundreds of seats available an hour or two later.

That was why there were thousands of empty seats. The bungling bureaucrats hadn’t even the wit to assign them to the soldiers who had been drafted in at the last minute because of another foul-up in employing a private security firm who had not the manpower to do the job.

So could you get tickets by other “illegal” means?

Well, of course you could. The bureaucrats desire for total control is as inefficient as everything else they do. The ticket touts were doing business as usual, but as usual they were charging two or three times the face value of the tickets. Whether that practice is right or wrong is a question for another time. But they couldn’t have done it had the idiots in charge not made such a hash of the whole thing.

I’m looking forward to see how they cope in Rio in 2016. My feeling is they should study what happened in London and do the complete opposite!