Some people have asked me why, when I am so scathing about politicians, I still have an interest in politics.

It is a good question because one thing is for sure, I do have little or no time for the politicians who in general I consider to be stupid, self-serving, untruthful, devious party-before-country hacks seldom, if ever, working for the best interests of the people they are suppose to represent. The exceptions to that statement are VERY rare!

But that’s my assessment of the politicians.

Politics as a subject is important because it sets the rules and standards that we all have to live by.

One of those standards that we have chosen to live by is the principle of ‘democracy’.

I used to think that I knew what that meant.

I used to think that in a ‘democracy’ the adult population got a chance to vote for candidates and policies that, based on the arguments and evidence provided, they thought were most in line with their own thinking and therefore best for the country as a whole.

I used to think that when a candidate said something during an election campaign he or she would stick by those pledges once elected.

I even used to think that ‘democracy’ meant that the country would be governed by the policies that the majority of people voted for.

I don’t think like that any more. Indeed I haven’t thought that way for some considerable time.

And I don’t think that way any more because the ‘democracy’ that we once knew has long since disappeared.

Nowadays ‘democracy’ is no longer a matter of principle, but rather a matter of political expediency. Nowadays ‘democracy’ means pandering to the vested interests of those who can donate millions to the obscene amounts spent on political campaigns. Nowadays politicians will say whatever they have to say to get elected and forget every promise they have made the minute the polls close.

President Obama was elected by a ‘democratic’ vote.

President Obama is a member of the ‘Democratic’ Party.

Yet President Obama is and will continue to try to ride roughshod over that ‘democracy’ by starting another war, or wars, that the vast majority of the American people do not want and did not vote for.

Wars that will eventually cost the lives of yet more young brave Americans in a foreign land – no matter how Obama and his minions like failed Presidential candidate Kerry try to spin it (i.e. lie about it). 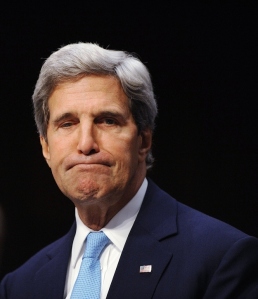 It may even cost the lives of those within America itself should these foolhardy misadventures spawn retaliatory terrorist attacks on the homeland.

Politicians rely on that.

None more so at the moment than President Obama and his sidekick Joe Biden.

Hardly anyone remembers that during the presidential election last year Biden attacked Mitt Romney for being “ready to go to war” in Syria. (York, Pennsylvania, Sept. 2, 2012)

In the previous campaign Biden also said that the nation could only be taken to military action with the approval of Congress, except where it was necessary to stop an “imminent attack” on the United States itself. 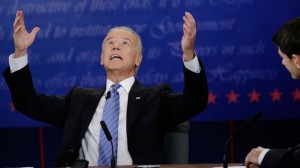 He was supported in this ‘principle’ by the then ‘Senator’ Obama, who said that the President does not have power under the Constitution to unilaterally authorize a military attack in a situation that does not involve stopping an actual or imminent threat to the nation.

“The Constitution is clear”, Biden declared. “And so am I.”

I wonder where all that ‘clarity’ has gone today?

Maybe it’s in a White House cupboard somewhere, on a shelf along with ‘democracy’.

Hi folks, just a little additional blog post for today. I don’t do this very often, only when I come across something that isn’t really substantial enough for a full post, but which I nevertheless find amusing.

So here is a short video of hos they saw the recent US Presidential Election in Taiwan.

What better way to spend a quiet Sunday than reading a few more of those word puzzles called anagrams. As usual it is a mixture of new subjects and old, but I hope you find something in this lot to make you smile.

This rotten Arab is real demon.

Fun was had in bed

Ah not a smile?

Another selection of those word puzzles called anagrams. Some of the usual suspects are back, but with different takes on their name, and of course thee are a lot of new ones too.

Death, it starts in ice

On scale of sin

End is a car spin

I’m a jerk but listen

Docile, as a man tamed it

‘President Bush of the USA’

A fresh one, but he’s stupid

According to the dictionary, a pun is the humorous use of a word or phrase so as to emphasize or suggest its different meanings or applications, or the use of words that are alike or nearly alike in sound but different in meaning; a play on words.

I like puns. Sometimes they can be quite clever and humorous. At other times they can lead to an excruciatingly bad joke, although the worse they are the funnier they seem to be. Strange thing humor.

I have a load of examples in the archives. Here are some to give you a taste of what may be in store.

The fattest knight at King Arthur’s round table was Sir Cumference.

He acquired his size from too much pi.

I thought I saw an eye doctor on an Alaskan island,

but it turned out to be an optical Aleutian.

She was only a whiskey maker,

but he loved her still.

No matter how much you push the envelope,

Would a grenade thrown into a kitchen in France result in

Two silk worms had a race.

They ended up in a tie.

A hole has been found in the nudist camp wall.

The police are looking into it.

Apparently Mitt Romney donated the entirety of his inheritance from his father to the Brigham Young University. Is this guy a Moron?

Two hats were hanging on a hat rack in the hallway.

I wondered why the baseball kept getting bigger.

Then it hit me.

A sign on the lawn at a drug rehab center said:

“Keep off the Grass.”

The midget fortune-teller who escaped from prison

was a small medium at large.

The soldier who survived mustard gas and pepper spray

is now a seasoned veteran.

In a democracy it’s your vote that counts…

In feudalism it’s your count that votes.

When cannibals ate a missionary,

did they get a taste of religion?

If you jumped off the bridge in Paris ,

you’d be in Seine.

The stewardess looks at him and says,

“I’m sorry, sir, only one carrion per passenger.”

Did you hear about the Buddhist who refused Novocain during a root canal?

One says, “I’ve lost my electron.”

The other says, “Are you sure?”