In Britain and some other countries, vehicles with automatic transmission are the exception rather than the rule. It tends to come as standard only on the high-end cars and SUVs. I’m not sure whether this is a result of tradition, or stupidity, or maybe even stupid tradition, but it’s how things are.

In many other countries, however, including the United States of America, automatic transmission on vehicles is standard.

So what has this got to do with stupid criminals you may ask?

Well, the answer is that cars get stolen. A lot of them. Every day.

And every so often, you’ll hear about a dumb car thief in America who got completely stumped in their criminal career because they didn’t know how to operate a manual transmission.

But 19-year-old Jasmine Hernandez from Phoenix was different.

She wasn’t dumb. She was VERY dumb!

One Saturday evening, a man was dropping off his kids at a home to visit friends and he left his car running on the driveway while he went inside with the youngsters.

When he returned outside again, he heard his engine revving and saw that a woman, Jasmine, was in the driver’s seat of his car.

The owner of the vehicle opened the door in an attempt to prevent her from getting away and saw that she was frantically using the levers that adjust the lights and windshield wipers in an attempt to put the car into drive.

Poor Jasmine had no idea how to operate the transmission because she was apparently unaware that some vehicles  –  in fact, many, many vehicles  –  don’t have column-mounted shifters.

The rest of the story is easy to guess.

The owner of the vehicle was able to pull Hernandez out and detain her until police arrived.

Police discovered Hernandez had a warrant out for her arrest for aggravated assault and arrested her on those charges.

Her attempt at becoming a car thief was apparently so bad that police haven’t even charged her with that crime.

And that is the story of Jasmine Hernandez, the stupidest car thief in the world! 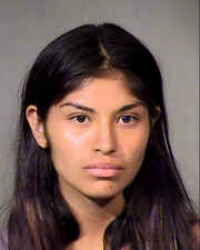