You know there is something very wrong with your society when it allows vociferous minorities to dictate how the majority of people are allowed to live their lives.

They still call it democracy, but it is not.

The reason it happens is not because loud mouth minority interests demand this or that or the other, but because the majority have lost any backbone they ever had and capitulate in the face of almost every demand, no matter how nonsensical.

It never works the other way because when Westernere go to other countries we abide by the rules of that nation. We do not try to impose our beliefs on them, not nowadays anyhow.

For example, if I end up in a Muslim country where alcohol is not permitted, I respect their laws and don’t drink alcohol. Similarly, if I want to visit Israel, I’ll eat kosher. Or if I go to India I won’t demand that they slaughter a sacred cow just so as I can have a juicy steak!

We’re on the subject of food and drink because the latest to buckle under is the fast food chain ‘Subway’ in the United Kingdom and Ireland. (Watch out, you’re next America!)

Because of the demands of a few within the Muslim community, Subway has chosen to ignore the wishes of the great majority of its customers and has removed ham and bacon from nearly 200 of its stores.

The meats that they still serve are also to be Islamic hal-al only. 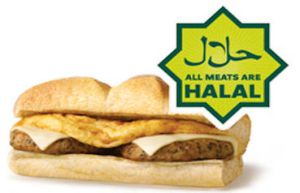 In case you don’t know, hal-al is not the Israeli national airline (that’s El Al), but is a specific way of slaughtering animals for human consumption.

Traditionally in halal abattoirs the throats of the animals are cut while they are fully conscious – an act many campaigners say is inhumane and needlessly cruel – whereas in non-halal abattoirs, livestock are stunned before killing to prevent any unnecessary suffering.

So if you are in the UK or Ireland and looking for any of the following “Subs” you are in for a disappointment.

As regards me personally, it’s Subway that is in for the disappointment, because I’ll be deliberately missing them the next time I get hungry enough for some fast food.

I fail to see why I should support a company like Subway for whom my tastes, as part of the majority of its customers, means nothing.

So well done Subway, you’re stock value should be heading the sub way too if you continue to show contempt for your core customers who made your company what it is  –  er, make that, what it was.

Now where did I put that Burger King menu???