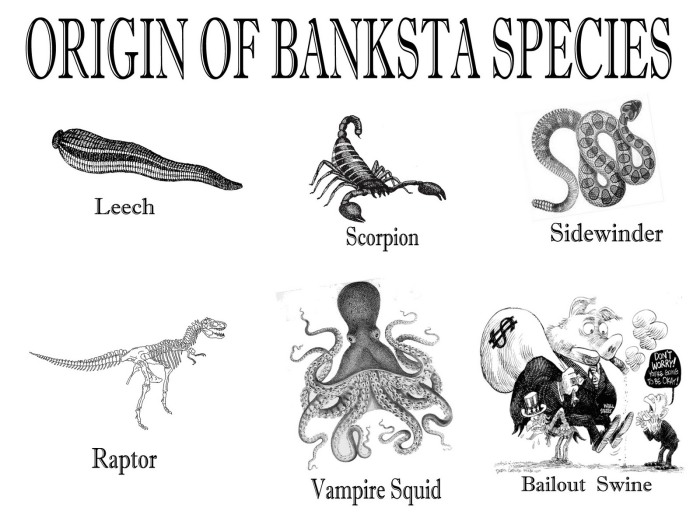 Time for another rant about the slime of creation, also known as the banksters.

This blog is about highlighting and fighting against stupidity and bureaucracy and there is no better example of this than the banking industry.

Their stupidity is only matched by their arrogance and their greed.

More than five years on from plunging the world into a financial catastrophe, and all of us into debt that will take generations to sort out, they are still at it!

And the governments are still faffing about, afraid to take on those who bribe them with “contributions” to their election campaigns.

For example, the European parliament only reached a “tentative deal” last Wednesday evening to limit bankers’ bonuses at twice the value of their fixed pay. They call it “imposing the toughest limits on pay since the financial crisis”. Gimme strength!!! Of course, the deal, still has to be endorsed formally by governments and lawmakers (i.e., the bureaucrats), and is the result of 18 months of farting around (they call it negotiating).

It’s a start, but a poor and a slow one.

It shows how long it takes for a no-brainer to happen in heads that have no brains!

Already more than 80% owned by the British Government (i.e., taxpayers) who stupidly bailed out these idiots to the tune of almost $70 billion, RBoS have announced further losses of around $9 billion!

To make matters worse, $1.6 billion of that was to compensate clients wrongly sold insurance and interest-rate hedging products – which is a nice way of saying they have been caught fleecing their customers and now have to pay back money they cheated their clients out of in the first place.

They called it a “chastening year”.

Meatime Lloyds chalked up further losses to the tune of more than $2 billion!

And the banksters aren’t any smarter in Spain either. Bankia also this week reported a net loss of €19.06 billion ($25.04 billion) for 2012, by far the largest in Spanish corporate history.

And you know what? Let’s add insult to injury.

These dumb-asses are looking for bonuses for their efforts.

Can you believe it?

If someone starts a business and it fails, no one gives them a bonus – they lose their business (usually because the banksters force them to close down).

Just how on earth have we allowed the banking industry to create a culture of stupidity to take hold and remain in place after such clear evidence that it is not working. It is completely absurd.

Hit your sales targets, make money for the company and yes sir you can have a bonus and well deserved. Cost the company $ billions and drive it to bankruptcy because of your incompetence and the only bonus you should get is early parole for good behavior.

That’s Europe taken care of, can’t go without a word about the American banksters too.

Latest news is that they “have discovered” that they wrongfully foreclosed on more than 700 members of the military during the housing crisis and seized homes from about two dozen other borrowers who were current on their mortgage payments,

The banks, namely Bank of America, Citigroup, JPMorgan Chase and Wells Fargo, only found the foreclosures after regulators ordered them to examine mortgages as part of a multibillion-dollar federal settlement. Each bank “discovered” around 200 members of the military whose homes were wrongly foreclosed in 2009 and 2010.

So while military personnel are putting themselves in harm’s way to protect and defend the country, the slime in the banks are busy trying to illegally foreclose on their homes.

Not only do these foreclosures violate the Servicemembers Civil Relief Act, a federal law requiring banks to obtain court orders before foreclosing on active-duty members, but they violate every common law of decency.

The sooner governments come to their senses and put these banksters out of business the better and cleaner the country will be.