I must admit to not having much time for nuts with allergies, er… to nuts. But I’ve always liked the edible variety, particularly peanuts and peanut butter. Liked it when I was a kid, still like it today. One of the best culinary inventions ever, in my opinion.

Peanut butter has been invented and reinvented many times during history. Peanuts were known as early as 950 B.C. and originated in South America. The ancient Incas used peanuts and were known to have made it into a paste-like substance.

As a crop, peanuts emigrated from South America to Africa thanks to early explorers and from there traveled by trade into Spain which then traded the product to the American colonies. A rather roundabout way to get to the US, but there you are, or rather, here it is.

The first commercial peanut crop was grown in Virginia in the early to mid 1840’s and in North Carolina beginning around 1818.

According to the Corn Products Company, Dr. Ambrose Straub of St. Louis patented a peanut butter-making machine in 1903 and some unknown doctor invented peanut butter in 1890.

By 1914, many companies were making peanut butter.

Joseph L. Rosenfield invented a churning process that made peanut butter smooth and in 1928, licensed his invention to the Pond Company, the makers of “Peter Pan” peanut butter.

In 1932, he began making his own brand of peanut butter called “Skippy” which included a crunchy style peanut butter. 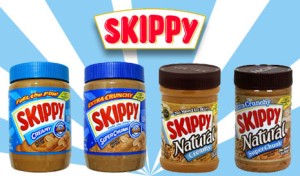 But it is possibly agricultural chemist, George Washington Carver who has the best claim to the peanut butter gold medal position. In the course of his research he discovered three hundred uses for peanuts and hundreds more uses for soybeans, pecans and sweet potatoes.

Carver wanted poor farmers to grow alternative crops both as a source of their own food and as a source of other products to improve their quality of life.

He started popularizing uses for peanut products including peanut butter, paper, ink, and oils beginning in 1880, the most popular of his 44 practical bulletins for farmers contained 105 food recipes using peanuts.

However, Carver did not patent peanut butter as he believed food products were all gifts from God. The 1880 date precedes all the above inventors except of course for the Incas, who were first. It was Carver who made peanuts a significant crop in the American South in the early 1900’s. Today half of all edible peanuts produced in the United States are used to make peanut butter and peanut spreads.

And here are a lot of other things you probably didn’t know about peanuts….