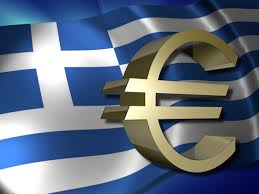 I used to love listening to George W Bush when he talked about the ‘Grecians’. He was an idiot, but unlike some holders of his post I think he secretly knew it.

But, enough of that, let’s concentrate on the Grecians.

Their financial crisis is deepening and they’ve shut down all their banks. They’ve also imposed what are called ‘capital controls’, in other words what you can and cannot do with your own money –  assuming you could get to it in the first place.

Several Western countries, including the US and Britain, have issued travel warnings for Greece. Not a warning about the place being very dangerous, just a warning to have enough cash to be able to pay for things now that the banks are shut and presumably their ATMs as well.

This recent activity by the Greek government is because of the breakdown of talks between Athens and the European Union concerning the Grecians’ enormous debt that they clearly can’t afford to pay back. EU finance ministers rejected Athens’ request to prolong a financial assistance program.

It is also about a bit of timely government blackmail.

The Greek government has so far been unable to formulate any meaningful plans to curtail their spending significantly. The Greek people likewise have become used to living beyond their means and are reluctant to tighten their belts. The people are blaming the government and the government is blaming the people and nothing is really getting resolved.

So Greek Prime Minister, Alexis Tsipras, shut the banks and said they would stay shut until July 6, conveniently the day after a nationwide referendum on whether to accept the bailout terms proposed to Greece by its creditors.

Some commentators also think that the banks may have been shut because they don’t have enough cash left. The Greek people think the same and are panicking to get their money out of the banks. Runs on banks inevitably lead to disaster.

As Greece is part of the Euro zone it does not have control of its own monetary system. In other words, unlike America which can simply print more money if and when it needs it, the Grecians have to rely on the European Central Bank giving them cash. and it has refused to give them any more Euros.

That decision could prompt Greece to default which would probably lead to it being kicked out of the Euro zone and possibly out of the EU itself, which would be an historic first and something that would be done very reluctantly. 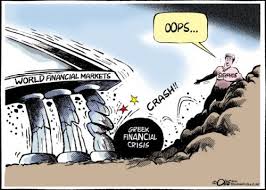 The rulers of the EU are in what is known as a ‘tight spot’. If they don’t take a tough line on the Grecians they can be sure other poor countries in the EU will follow suit. If they do take a tough line, then the upheaval will undoubted have an impact on the Euro currency.

A Greek default would also be another kick in the greedy teeth of the big financial institutions who own a good part of the massive €300 billion debt – you see there are positives in every situation if you look hard enough.

So it looks like emergency meetings and frantic discussions all over the place in Europe.

Despite the fact that Dubya is long gone from the political scene, I don’t think we’ve heard the last about the Grecians just yet.

By the way, Happy Independence Day to all my American visitors, bet you’re glad you’re not part of Europe these days.